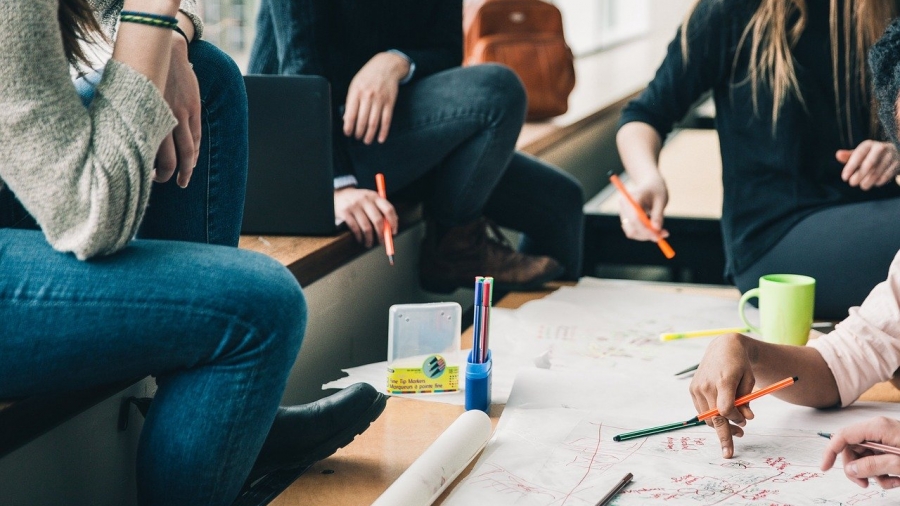 SEVERAL YEARS AGO, when I was looking back at my work history, I suddenly realized one of my superpowers—I can survive in even the most challenging and difficult of work environments. Even if, prior to my arrival, the position I took had a high turnover rate, it became stable when I took over. I was able to settle into the position calmly and tranquilly. Although it appears that I am highly loyal and have a high tolerance for stress on the job, the real reason I have stayed in various jobs is partly because I didn’t want to have to get to know new coworkers all over again!

GETTING TO KNOW PEOPLE AT YOUR NEW JOB

No matter whether an introvert is moving, switching jobs, or even immigrating, each time they come to a new place, they face these hurdles. Unless they get lucky and have an understanding and friendly colleague or neighbor who gives them a hand, in most circumstances, the introvert will have to conquer these issues themselves. Not wanting to deal with or not enjoying dealing with these problems doesn’t mean that you can’t beat them. When introverts come face to face with problems arising from being in a new environment, they need three things to break through and become comfortable: they need to find allies, demonstrate their work capabilities, and make their contributions obvious. When you’ve succeeded in these three things, you’ve solved almost all of your problems.

STARTING WITH JUST ONE FRIEND

In his capacity as a director of growth, Faisal Al- Khalidi wrote in his article, “The Ultimate Guide for Introverts in New Environments,” that the first step to adapting to new environments is to change your perspective. But you’ve been working on this all along, right? Each time you arrive in a new class or go to a new club or a new office, you work hard to tell yourself that you don’t need to be afraid of taking the initiative to talk with others or of being ignored and treated with cold indifference. If you have just begun a new job, one of the easiest ways to cope with the throngs of people and your initial discomfort is to make just one friend! This is all it takes to start easing into being comfortable in your new workplace. You can find the person who appears to be the kindest and most welcoming and have them be your foundation; then you can slowly start to get to know your other coworkers. While you’re doing so, make sure to learn about the group’s power structure and the roles everyone plays in that structure. Once you have a friend, starting a new job often isn’t that scary.

You may be wondering what you should do if you happen to go overseas for work where many things will be unfamiliar. Elsa Ho, the founder of Conversion Lab, has worked in various places, such as Singapore, Japan, and Shanghai, China. This is what she had to say: Use social media groups more often to find people with similar professional backgrounds or interests. There are many networking events out there, but Elsa, who is an introvert, tends to try to arrange activities with only one person at a time, such as socializing over coffee, instead of joining activities involving large groups of people. For introverts, one- on- one interactions, or as close as we can get to this ideal, are a much more effective way of getting to know peoples.  There are other ways you can ease yourself into a new location. Faisal Al- Khalidi also points out that engaging in activities, volunteering, participating in alumni associations, and making friends with your neighbors and/or roommates are all helpful steps when you’re taking the leap into a new life in a new city.

There’s a line from Marti Olsen Laney’s The Introvert Advantage: How to Thrive in an Extrovert World that goes a little like this: “Introverts aren’t actually good at memorizing appearances or looks.” This has definitely been the case in my experience. Each time I watched a movie, my extroverted roommate would ask me, “Do you know who the actor/actress is?” I’d wrack my brain trying to remember the actor’s name to the point that my roommate would just erupt in laughter. It’s no big deal if you can’t remember who’s playing up on the silver screen, but it’s extremely embarrassing when you’re starting off in a new company and you’re unable to remember your coworker’s name or face, even more so when you just met them the day before but you’ve already forgotten, and it seems as if you’ve never met. In fact, for this issue, it doesn’t matter if you are introverted or extroverted. Most people are not extremely good at remembering names. Neurological studies have shown that this is because in the brain, methods for handling proper names and other information are dissimilar. When your brain is trying to link up a face and a name, it’s like trying to integrate two different systems into one brand- new system; for example, your brain is trying to connect the two concepts of “the person speaking during the meeting” and the name: “Mike.” American business writer Keith Rollag suggests that you use the methods of repeating names, writing names down, and using photos of people to aid your memory, giving yourself more associative connections to cut down on the time needed to jog your memory. My own method for making connections between names and faces at a new job involves first drawing a diagram of the seating in the office. I then write down people’s names, something about their appearance, such as whether they wear glasses or their hairstyle, any special characteristics about them, and so on. I can then use these notes to help my memory. I look back at the diagram and notes from time to time, and as a result, I’m more able to process my interactions involving these people.

I was talking recently with an extroverted friend of mine when he told me something unexpected: “Being too extroverted can also be a hindrance to social interactions or in the workplace. It’s not just you introverts who have to work on yourselves.” When I heard these words come out of my friend’s mouth, I was shocked. How could this even be possible? Do extroverts also need to practice? What exactly is it that they need to work on? My friend asked me a question in response: “Have you never encountered someone who is desperately trying to get acquainted with you but it feels like it’s too much of an effort from your perspective?”

In that instant, it was like a switch was flipped in my mind: “Right, it’s not just introverts who have to work on themselves. Extroverts need to as well.” In this world, each person is being socialized. Everyone is training themselves on how to act under social norms, how to hone their own way of being accepted by others, and even how to be liked. So, what I’m really trying to say is this: Don’t worry! New environments, new friends, a new job, . . . It’s not a big deal. Let’s practice together!